Why Being “Disagreeable” Might Actually Make You More Successful 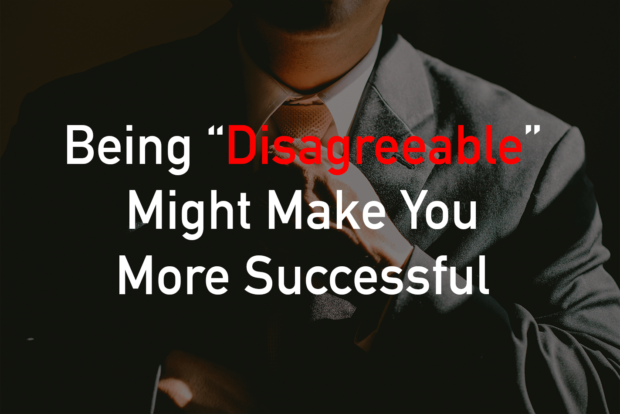 Have you ever sat in a meeting with 10 other people and disagreed with all of them?

If so, you’re far from alone.

We’ve all been in situations where everyone else in the room seems to agree on a seemingly-idiotic course of action. What you might not have realized is that voice in your head yelling “are you guys kidding me? This is insane!” might actually be indicative of your ability to succeed.

In his book David & Goliath, Malcolm Gladwell talks about a specific personality trait that has led seemingly unqualified individuals to the pinnacles of success.

Gladwell describes this characteristic as being “disagreeable.” Not in the common sense of the word, but in the sense that they didn’t feel the need to adhere to beliefs and behaviors that were considered normal. Put another way — they didn’t rely on the approval of others before taking action.

By veering left when the crowd turned right, these individuals were able to take the “back door,” so to speak, while everyone else was busy trying to squeeze through the main entrance.

What I found truly fascinating about this was the fact that each individual Gladwell highlighted found themselves in a position that many of us are familiar with: They were unhappy with their current situation but they lack the traditional “qualifications” to do anything else.

Brian was born in Los Angeles, CA. He was the son of a criminal defense lawyer and, like Gary, school just did not agree with Brian.

“Through seventh, eighth, ninth, and tenth grade, I was getting mostly Fs, with an occasional D…I was only passing because my mom wouldn’t let them put me back.”

Later on in high school, Brian discovered a “disagreeable,” yet, extremely effective strategy. He began to challenge all of his grades.

“Literally every time I got my grade in high school, after the report cards came out, I would go back to each teacher and do a one-on-one.

I would argue my D into a C and my C into a B. And almost every time — ninety percent of the time — I got my grade changed. I would just wear them down. I got really good at it. I got confident.

In college, I would study knowing that I was going to have this hour-long meeting afterward with my professor. I learned how to do everything possible to sell my point. It was really good training.”

Side Note: Tim Ferriss talks about a similar “disagreeable” behavior in his book, The Four Hour Workweek. If Tim got a grade he wasn’t happy with, he would schedule a 2 hour meeting with his teacher and then proceed to pepper them with questions.

His goal was to make the session as unpleasant as possible, making his professors think twice about giving him a bad grade in the future.

After college, Brian landed a 3 month internship as a clerk at Warner Brothers Studios.

Shortly after he started, he noticed an open office on his floor. He asked his manager if he could use it and got the go ahead. Brian proceeded to finish his day’s work in an hour and spend the next 7 calling people in the movies industry saying “I’m Brian Grazer. I work at Warner Bros in business affairs and I want to meet you.”

Today, Grazer is renowned film producer and co-founder (along with Ron Howard) of Imagine Entertainment. His films and TV shows have been nominated for 43 Academy Awards and 131 Emmys. His resume includes:

None of that would have been possible if Brian was “agreeable” to everyone else.

What Does Science Say?

After completing the survey, the students gathered in a room where they wrote down original ideas for a marketing campaign. Next, the students were arranged in groups of three and asked to create a plan based on their ideas.

Hunter & Cushenbery found that, while there wasn’t a relationship between agreeableness and innovative thinking, students rated as “less agreeable” were more likely to have their ideas included in the group projects.

Because “disagreeable” people are willing to argue and fight for their own ideas regardless of what others think.

Is this true in every case?

In a second experiment, Hunter & Cushenbery found that disagreeable people were at a disadvantage when the environment was supportive and collaborative.

For those of us familiar with the task of job searching or starting a business from scratch, we can all agree that those environments are neither supportive nor collaborative.

The bottom line is, if you want something and you are truly passionate about it, don’t be afraid to bend the rules and upset a few people. You might just find yourself leading the pack.