5 Questions To Ask In An Interview (Based On Psychology) 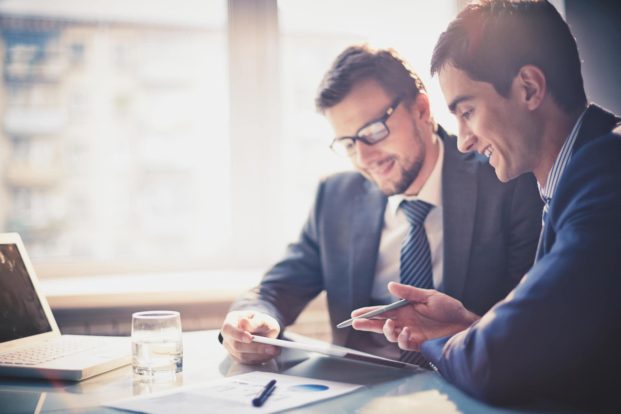 Welcome to the quick (but complete) guide on questions to ask in your next job interview. In this post we're going cover:

Why Asking Questions In Interviews Is Highly Underrated

When most people prepare for interviews they focus all of their energy on one thing: practicing answers to dozens of questions they think they may be asked. Most of them don't even think to prepare any questions to ask in the interview. That's like catching a 90 yard touchdown pass only to celebrate early and fumble the ball on the one yard line.

In my humble opinion, the opportunity for you to ask questions at the end of an interview is probably the most crucial part of the entire interview.

Why? I'm glad you asked.

The Q&A portion of the interview is the only part that you truly own. You can ask whatever you want. You can turn the conversation in any direction you choose. This is huge because it allows us to employ a few psychological techniques that will help you create a positive association in your interviewer's brain and leave a lasting impression.

The first is a branch of the Serial Position Effect called the Recency Effect which states that people remember items that occur at the end of a series best. Let's think about the interview as a series of events. It starts off with the introductions, then moves into the behavioral questions, followed by technical questions and wraps up with you asking the interview some questions (Q&A).

If we rated the interviewer's ability to remember different parts of the interview on scale of 0 – 10, it would look like this: 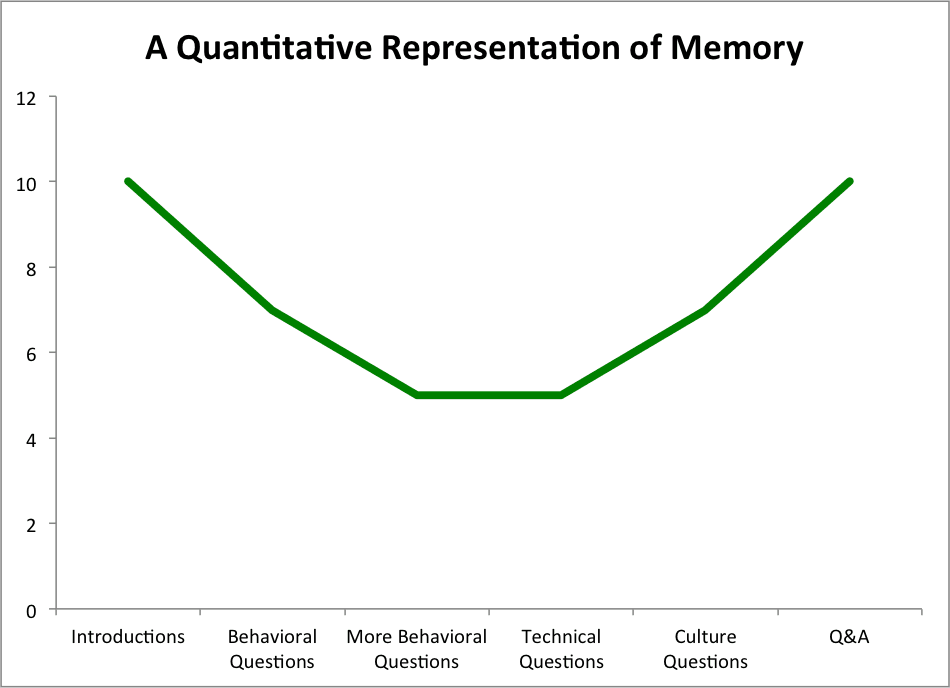 According to the Recency Effect, our interviewer is most likely going to recall the Introductions and Q&A portions best when they are reflecting on the interview.

Now that we know our questions are more likely to be remembered than anything else, we want to ensure that the memory associated with them is a positive one. In Better Interview Bootcamp (a mini course on improving your interview skills that I share with my email list), I talk about the idea of Conversation Ratio.

A few smart people over at Harvard's psychology department ran several studies where they scanned people's brains while they spoke about two things: themselves or other people. In all of the studies, talking about one's self led to activity in the parts of the brain associated with reward and pleasure.

The researchers even decided to take it one step further by offering to pay participants based on the answers they gave. The results showed that people were willing to forgo 17% of their earnings in order to answer questions about themselves. That number went up to 25% when they knew someone else (like yourself) was listening.

Talking about ourselves, our interests and our problems makes us happy on a molecular level – especially when someone else is listening.

We can use this to our advantage by asking a specific set of questions that prompts the interviewer to speak about themselves or topics that are close to their hearts.

Click here to get my Interview Question Cheat Sheet with 19 MORE questions!

5 Psychology-Backed Questions To Ask In An Interview

To give some context, I went on 50+ interviews at dozens of companies over the span of 12 months. During that time, I split tested tons of interview questions in order to identify which were the most effective at leveraging the principles above. Based on feedback over time, I narrowed it down to the following set of 5 questions.

This is the exact set I used when I was interviewing at Google, Uber & Twitter and it prompted emails from executives at these companies after the interview that specifically referenced these questions.

1 | What Is Your Favorite Part About Working For Company X?

This is the softball. It's a great lead off that accomplishes two things:

2 | What Is The Biggest Challenge Your Team Is Facing Right Now?

From the interviewer's perspective, this question shows them that you're interested in their problems – that's a great thing. On your side, this question is one of the most important in this list. It helps uncover information that you can later use to solidify your chances of landing the role and even negotiate a higher salary.

You want to dig deep here and get as much information as you possibly can:

3 | Lets Fast Forward One Year – You're Looking Back On This Hire. What Did They Do To Exceed All Expectations?

In the eyes of the interviewer, this question is gold. You are essentially saying “I want to know what success looks like so I can come in and absolutely crush this role.”

On your end, it will give you some great insight into the abilities you need to have mastered in order to perfect the role. I loved this question when I was interviewing because it let me know whether the role catered to my strengths (and thus would require less effort to succeed) or if I would need to learn new skills to excel.

4 | What Is The Most Unexpected Lesson You've Learned While Working At Company X?

This is the one that sets you apart. It's totally unique. Don't be surprised if you get a “wow, nobody's ever asked me that!”

According to my data, it's also the most “sticky.” Almost every person I interviewed with mentioned this question in their feedback. It also led to multiple email conversations with executives at the above companies post-interview.

5 | Tell Me A Little Bit More About You, What Do You Like To Do Outside Of Work?

This is your closer. You've talked about business for 30 – 60 minutes, now it's time to get personal. The reason this question is so powerful is because it not only has people talking about themselves, but it also gets them talking about their interests – things that make them happy.

Hopefully you did some research on your interviewer beforehand giving you an idea of common interests. If so, steer the conversation in that direction and you are golden. Next thing you know, you've talked for an extra 15 minutes, built a strong rapport and have some great content for your thank you email.

Click here to get my Interview Question Cheat Sheet with 19 MORE questions!